What it’s like to live and study in Ireland

My name’s Agnieszka. When I was 20 I left Poland for Vienna in order to study Instrumental and Vocal Music Education (IGP) at the mdw with the flute as my main instrument. Since I always found travels travelling and foreign languages fascinating, I knew it wasn’t the end of my international adventures – I wanted to go abroad again, taking part in the Erasmus+ programme, to study for one semester somewhere else. So in September 2014 I found myself in Dublin, Ireland, about to start my first term of masters – as an exchange student at the Royal Irish Academy of Music.

After having studied at the mdw for four years, the academy in Dublin seemed unbelievably small – just one building that could easily be overlooked as it stood in a long row of similar ones, it had only one entrance, and there was absolutely no way of missing anybody you might know there. It was definitely a huge advantage for a new student like myself; I would run into other Erasmus students and colleagues from the same class often enough to begin planning trips, hikes, parties and other social and extra-curricular activities, also those more typical of music students like going out for concerts and playing chamber music together.

The humble capacities of the academy also meant that finding a practice room during the day was not easy though this inconvenience could be compensated for in early mornings and evenings. À propos getting a room, the whole thing came down to walking through the building and checking which rooms were free – you would either listen at the door or have a look at little screens put outside some of the rooms showing a monitoring video/feed from inside. Once you found an unoccupied room, you could go in, unpack, and start practising – and what’s more, stay as long as the room wasn’t needed for teaching or, in the evening, until the academy was being closed. To tell the truth, the monitoring cameras installed in some rooms made me feel rather uncomfortable at the beginning, and the acoustics of the academy – which allowed sounds to spill through doors, windows and walls – made me struggle to focus. However, after a while I regained my old ability to ignore everything that wasn’t important at the moment, so I perceive these circumstances as rather advantageous. All in all, being capable of concentrating regardless of any distractions is an essential skill for a musician.

There was also another reason for me to concentrate mainly on the flute. Unlike Vienna, hardly any of the classes were pedagogical or theoretical in nature, so in the end nearly everything that I chose ended up as a subject of my free choice (freie Wahlfächer). The least practical classes I attended were in Irish Music. Each week we – nearly all Erasmus people and first-year students – would learn about Irish folk music, and at the end of every lesson we used to play at least one Irish folk melody – learned without scores, by listening to our teacher on the fiddle, and by repeating what she played. Instead of an exam at the end of the term there were short presentations prepared by students on given topics, and a writing task consisting in transcribing an interview carried out with a trad musician of one’s own choice. Apart from that, our teacher invited the students to bring their instruments (usually violins or Irish flutes) to a pub called the Cobblestone and to join in with local musicians for a trad session. Even though we could only play along only a few tunes it was a great experience. Many thanks to the Irish trad musicians for playing slower than usual! 🙂

All in all, I found working on my flute skills with professor William Dowdall really motivating and enjoyable, and performing Benjamin Britten’s “War Requiem” in St. Patrick’s Cathedral as a choir singer was quite cool. As for the rest of the subjects, I simply had to stop comparing the academy to mdw and… well, enjoy my holiday semester!

The first week in Dublin surprised me with its sunny and warm weather. A raincoat that I took from home having been convinced that I’d be getting soaked constantly for the whole semester ended up being completely unused. An after-sun lotion, on the contrary, turned out to be essential after a few days of walking around the city while I was trying to visit all of the cities most interesting places on foot. (Don’t get me wrong – I still carried my umbrella at all times as the weather could change very quickly, multiple times during a day).

The centre of Dublin struck me as very lively, not just because of masses of tourists that still flooded it at that time of year, but also because of the large amounts of young people – most passers-by seemed to be in their twenties or thirties. Streets were filled with music, either played live by buskers (guitar plus singing, amplified, was the most popular combination), or played in souvenir shops. Sounds of fiddles and tin whistles in traditional Irish tunes definitely contributed to the unique, positive vibe of the place. 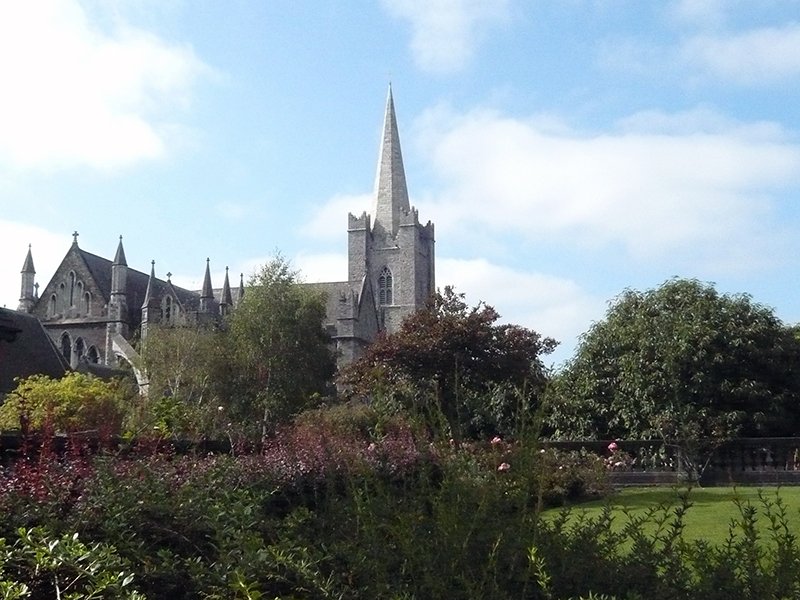 O’Connell Street and Grafton Street with the St. Stephen’s Green park at its end are the centre of the city of Dublin. The Academy is located a 10-minute walk from here, so the whole area is really nice for meeting friends or shopping. And when a more relaxing place is needed, one can walk along the Liffey – the river which flows through the very middle of the city, dividing it into a north and a south side – watching seagulls, or spend half of a day strolling around the vast Phoenix Park where, with some luck, one might even run into a deer.

As for cultural life, classical music is not as big in Ireland as in German-speaking countries, but the National Concert Hall offered quite an interesting and varied programme. What’s more, in less touristy pubs one can listen to authentic trad sessions where local musicians meet at least once a week to play  jigs, slip jigs, reels together and to have a pint. The two main Anglican cathedrals, St. Patrick’s and Christ Church, are the places to visit for chorale music lovers – mixed and boys’ choirs sing there every Sunday. And since literature is something that Ireland may certainly take pride in, going to the theatre, browsing in numerous bookstores and reading extensively are more than obvious  leisure activities 🙂

That autumn was absolutely beautiful and only from mid-November on did the rain and cold winds start to become unpleasant. Clouds covering the sky for most of the time now made me wake-up with less enthusiasm than earlier. Finally I bought a bottle of liquid vitamin D and began to add to my breakfast porridge loads of oranges and cinnamon to better my mood. Well, together with the increasing amount of work for flute lessons, more intense classes, many rehearsals, seeing people who were not strangers any more but friends, and with Christmas coming, it was still okay 🙂 Leaving Dublin in the middle of December was not easy at all…

When it comes to daily life in Dublin, it’s best to find accommodation in the centre to be able to have all the most important places within walking distance. Public transport is pricey and commuting may take a lot of time as there’s no underground, and buses not only tend to get stuck in traffic jams, but also finish service around 11 pm on weekdays. Finding an affordable room to rent is a matter of luck, patience, reacting quickly to new ads on daft.ie or rent.ie, and having some savings / job / supportive family – the money from the Erasmus+ programme wouldn’t suffice for paying the rent. Fortunately, there’re numerous good-value hostels in the city to stay at while searching for a better accommodation. Most shops are opened on Sundays, so one may concentrate on other things during the week. And what’s more, Irish people are quite friendly, helpful and way more chatty than Austrians, so it’s all really not too bad 🙂

Agnieszka Bialek graduated with a master degree from the mdw in June 2016. Having studied Instrumental and Vocal Music Education while taking the flute as her main instrument, she also studied Composition and Music Theory, and specialized in Chamber Music, Conducting, and Inclusive Music Education.
View all posts by
Agnieszka Bialek