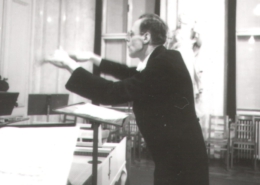 The study of „Early Music” at mdw (or its predecessor institutions) has a longstanding history that dates back all the way to its foundation as “Konservatorium der Gesellschaft der Musikfreunde” (Conservatory of the Society of Music Enthusiasts) around two centuries ago. We encounter Raphael Georg Kiesewetter (1773-1850) who was a member of the conservatory committee and acted as a visionary for “Early Music” through his extensive collecting activities and his performances of historical compositions. To this day, the development has been characterised by an ever-changing perspective on what is to be regarded as especially valuable “Early Music” as well as how it is to be interpreted.

At first, interest was primarily motivated by the general historical curiosity of a few. It was the beginning of the 20th century up until the 1930s that marked a re-discovery of certain epochs and composers as well as the rising popularity of certain historical instruments (such as the recorder and lute), albeit in a simplified style of play. “Hausmusik” (domestic music), a way of making music in small ensembles with no particular focus on professionality, excellence or perfection, became more popular. Furthermore, tendencies such as neoclassicism required a new understanding of approaching music. These developments were momentarily stunned during the two world wars and mainly took place during the period of reconstruction when the ”Wiener Musikakademie” (Viennese academy of music) placed a strong focus on “Early Music”.

What followed in the centuries to come was a dedicated search for “authentic interpretation” based on historical sources and the development of an accordingly professional style of play. This cultivation of “historical performance practice” was always coined by individuals who were idealists in their own fields and although they would have most certainly been playing music together their collaboration never led to a common institutionalised structure – as opposed to other musical educational facilities.

Early representatives of “historical performance practice” at the academy of music such as Josef Mertin (1904-1998) show a strong influence of the interwar era. Mertin had an education in the field of music history as well as organbuilding. After the 2nd World War he taught “Collegium musicum” (chamber music in “Early Music”, combined with the teaching of relevant theoretical knowledge) which was part of several different curricula and had a big influence on musicians and conductors like Hans Swarowsky, whose students were taught by Mertin and with whom he always maintained a professional exchange. These musicians went on to shape the so-called “Originalklangbewegung” (original sound movement) either through their playing or their teaching. Among them are prominent names such as René Clemencic (*1928), who taught recorder and ornamentation at the academy of music between 1961 and 1970, Gustav Leonhardt (1928-2021), who taught harpsichord between 1952 and 1955, Jürgen Schaeftlein (1929-1986), who taught oboe starting in 1970, Eduard Melkus (*1928) as well as Nikolaus Harnoncourt (1929-2016) and Alice Hoffelner (later Harnoncourt, *1930).

The post-war period was also characterised by a close connection to the “traditional” Viennese music scene and its performance practice. Bruno Seidlhofer (1905-1983) was a very typical personality of this era who is most known today as a professor of piano but who also taught “Collegium musicum” and for many years harpsichord. In 1949 two “Sonderlehrgänge” (special courses) for “Early Music” were established: Viola d’amore and Viola da gamba. The special course “Viola d’amore” was led by the Viennese philharmonic Karl Stumpf (1907-1988) and was supposed to teach not only the historical style of play but also the implementation and use of this historical instrument in new music. The other special course “Viola da gamba” (previously “Gambe”) was led by Karl Schwamberger (1905-1967) and later the instrument was also taught by Veronika Gutmann (*1943), August Wenzinger (1905-1996) and José Vasquez (*1951) among others.

Through the work of Karl Scheits (1909-1993) who played the lute in historical ensembles, the guitar gained more significance in the field of “historical performance practice” at the academy of music whereas it was only regarded as a temporarily fashionable instrument before. Historical instruments and their style of play were newly studied which caused many teachers (e.g. Schwamberger, Stumpf, Scheit) to dedicate text books to the interpretation of music on historical instruments. Another proof of the growing interest for historical sound lies in the purchase of several instruments, some of which did not yet correspond to their historical models but were nevertheless an important step in building a foundation for an education on original instruments. Instruments that were bought between 1945 and 1952 include two harpsichords, two organs, a positive organ, a fortepiano, a viola da gamba, a double-choired luste, two violas d’amore, five vielles and several recorders. This collection of instruments was expanded in the following years with the addition of preferably real historical instruments or copies of historical models.

One instrument that was already quite well established in the Viennese concert scene after the 2nd World War as a solo instrument was the harpsichord. This was the work of one of the most significant pioneers in the study of historical performance practice: Isolde Ahlgrimm (1914-1995). She was not only an avid collector of historical sources about performance practice but performed all of Bach’s works for harpsichord as well as in 1950/51 all of Mozart’s “Clavierwerk” on original fortepiani. This was an important impulse for the young generation of pianists, for example Paul Badura-Skoda (*1927)  who was also a professor for piano at the mdw from 1981 to 1994. His interest for “historical performance practice” is documented in several writings. Isolde Ahlgrimm taught harpsichord after the war until 1986 (with a few interruptions from 1975 on as full professor). Her successor was Gordon Murray (1948-2017) who was also an important harpsichord teacher along with Eta Harich-Schneider (1894-1986).

Another instrument with great significance for the pursuit of Early Music is the organ, which was taught by Anton Heiller (1923-1979) who started teaching after the war at only 22 years of age. His student Michael Radulescu (*1943) was also a professor who was very active in the field of “historical performance practice” and influenced many organists of the following generation with his thoughts.

At the time when Mertin received emeritus status in 1974, the historical performance practice of the original sound movement – which was then often regarded as a countermovement to traditional performance practice – was widely established in the Viennese concert scene. At the university (now “Hochschule”), however, new ways had to be found to provide room for ongoing development in this field. The solution was to institute a new course “Lehrgang für Historische Instrumentenpraxis” (course for historical practice on instruments) under the leadership of Eduard Melkus who managed to reach concert violinists in particular. Furthermore, there were many developments in the area of music pedagogy. Teachers such as Hans Maria Kneihs (*1943) – and their students – helped the recorder reach a new peak in popularity and Ernst Knava (1927-2018) revived interest in “historical performance practice” on his instrument, the violoncello.

In 2004 Ingomar Rainer (*1954) was appointed the newly-established ordinariate for Historical Music Practice (with courses especially for strings and wind instruments in performance studies).

The interest in the interpretation of “Early Music” was also reflected in a very specialised scientific and theoretic research. In 1957 a style committee (“Stilkommission”) was created that was tasked with basic questions pertaining to Historical Performance Practice (such as ornamentation, tempo…) as well as the “drafting of a list of editions that are unacceptable for the academy” („Ausarbeitung einer Liste von Editionen, die für die Akademie nicht tragbar sind“) and the “compilation of sources for interpretation that can be considered as authentic expressions of the composers” („Zusammenstellung der Quellen für Interpretationen, die als authentische Äußerungen der Komponisten gelten können“). Later the committee was re-named to “Arbeitsgemeinschaft für musikalische Werkpraxis“ (working commitee for musical practice) and from 1964 on Robert Schollum (1913-1987) was its chairman.

Courses about stylistics and performance practice in the department of music pedagogy led to the establishment of a professorship in 1987 (under Hartmut Krones, *1944). When the mdw officially became a university in 2002 with the full implementation of the Federal Act on the Organisation of Universities and their Studies (KUOG, “Bundesgesetz über die Organisation der Universitäten der Künste”) this professorship became the institute for musical stylistics research (Institut für Musikalische Stilforschung). It remained until 2016.

The interpretation of “Early Music” in the sense of a “historical performance practice” – which now encompasses the 19th century as well – is manifested in many areas through the work of many teachers that aren’t named here as they do not represent history but rather the present and the future.